How Much of Your True Potential is Hidden? 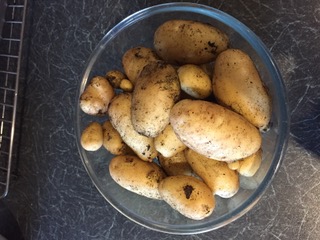 This may seem like a tenuous link but keep reading and all will become clear… often the best stuff isn’t just lying on the surface!

As you can imagine food, being very closely linked with our health, is something that’s quite important in our household. So, despite the fact that we have a very tiny garden space, a few years back we thought we’d dabble in a bit of “grow your own.’

Maybe for you that’s no great shakes, but it can be pretty daunting when you look on the internet and discover how complicated it can be when learning to grow your own produce; soil types and moistures, temperatures and greedy creatures, to name a few. I was very nearly put off, but instead I thought, hey, this is nature; a seed, soil, sunlight and water and I’m sure it can make its own way. I embarked on this project many weeks after it should have started according to “the experts”, so I didn’t anticipate much success.

Several weeks after stuffing a few potatoes in the ground the shoots started to appear, and as the weeks went by, they grew stronger and taller and nearly blocked our view from the window. It was very exciting actually, but still inside me, despite the physical evidence above ground, I held little hope that the family would be dining on succulent new potatoes any time soon!

The time came to dig some up and I was very proud of myself and my achievement as I placed my perfectly formed, baby new potatoes in front of my family that night. They tasted divine!

I gradually pulled all the plants up and we enjoyed a few meals with these dear little potatoes on the side. Then a few weeks later we decided to plant something else where the spuds had been, and we dug the soil in preparation. And here’s the surprise!

Beneath the surface and down quite deep in the soil were loads of larger, beautifully formed potatoes that I had previously missed. I was over the moon of course, but the metaphor hit me hard.

With my lack of experience, the fact that I’d started so late, and that all the experts seemed to say that home growing could be peppered with problems, I had expected to fail.

I was content with my very small harvest of spuds and I had not allowed myself to believe that I could do any better. Yet this glorious heist (half of them pictured) could have gone to waste, and very nearly did. I saw the links between this and how so many of us live our lives, and in particular, view our health.

In our society, we have come to expect ill health and restriction, and many live in fear of contracting some hideous disease or disorder based on the latest batch of scary statistics. Sometimes, the very idea of that causes us to give up on life before we even start! But no matter where you are on your life’s journey, please remember this; your body is a very intelligent creation which is hard-wired to heal, and it will always try to do so, provided it is given the right environment.

The Revealing Nature of Colonics

I’m not much of a one for trying to persuade someone to have a colonic as I’d rather they come to the idea in their own way in their own time. Lots of people say “oh I don’t need that, nothing wrong with my bowels” or “nah, I go six times a day”. Hmm.. that’s all very well and good (though frequency is no indicator of good bowel health), but here’s my point.

How do you know that how you feel today, in this moment, as you’re reading this, is as good as you’re capable of feeling? What might you find out about yourself if you dug a little deeper? Sometimes the prospect of that alone can scare people; especially those with skeletons in their cupboard but truly, if you want to live a fuller life, you have to be prepared to go beneath the surface and dig about in the depths, otherwise you’ll live a life of small potatoes.

For me, colonic hydrotherapy has always been about helping people to become more of themselves by clearing out the rubbish and giving a fresh perspective.

Many times I’ve received emails from clients who have been stuck in their lives, only to find that post treatment they’ve sorted out their affairs, like leaving an unsatisfying job, clearing out a garage, or making an important decision that they’ve been avoiding. Is it time for you to make a fresh start and clear out some rubbish from your system? This is how it was for me thirteen years ago when I had my first treatment.

My system had been polluted for years with the effects of my poor choices; alcohol, cigarettes and some pretty nasty food, but my first couple of colonics cleaned me up in body, mind and spirit, and changed the course of my life for the better. I never would have believed such a simple treatment could have such an influence on my life’s direction, but I see it too often in my clients for it to be a coincidence.

Newsletter Sign up
We use cookies on our website to give you the most relevant experience by remembering your preferences and repeat visits. By clicking “Accept All”, you consent to the use of ALL the cookies. However, you may visit "Cookie Settings" to provide a controlled consent.
Cookie SettingsAccept All
Manage consent

This website uses cookies to improve your experience while you navigate through the website. Out of these, the cookies that are categorized as necessary are stored on your browser as they are essential for the working of basic functionalities of the website. We also use third-party cookies that help us analyze and understand how you use this website. These cookies will be stored in your browser only with your consent. You also have the option to opt-out of these cookies. But opting out of some of these cookies may affect your browsing experience.
Necessary Always Enabled
Necessary cookies are absolutely essential for the website to function properly. These cookies ensure basic functionalities and security features of the website, anonymously.
Functional
Functional cookies help to perform certain functionalities like sharing the content of the website on social media platforms, collect feedbacks, and other third-party features.
Performance
Performance cookies are used to understand and analyze the key performance indexes of the website which helps in delivering a better user experience for the visitors.
Analytics
Analytical cookies are used to understand how visitors interact with the website. These cookies help provide information on metrics the number of visitors, bounce rate, traffic source, etc.
Advertisement
Advertisement cookies are used to provide visitors with relevant ads and marketing campaigns. These cookies track visitors across websites and collect information to provide customized ads.
Others
Other uncategorized cookies are those that are being analyzed and have not been classified into a category as yet.
SAVE & ACCEPT